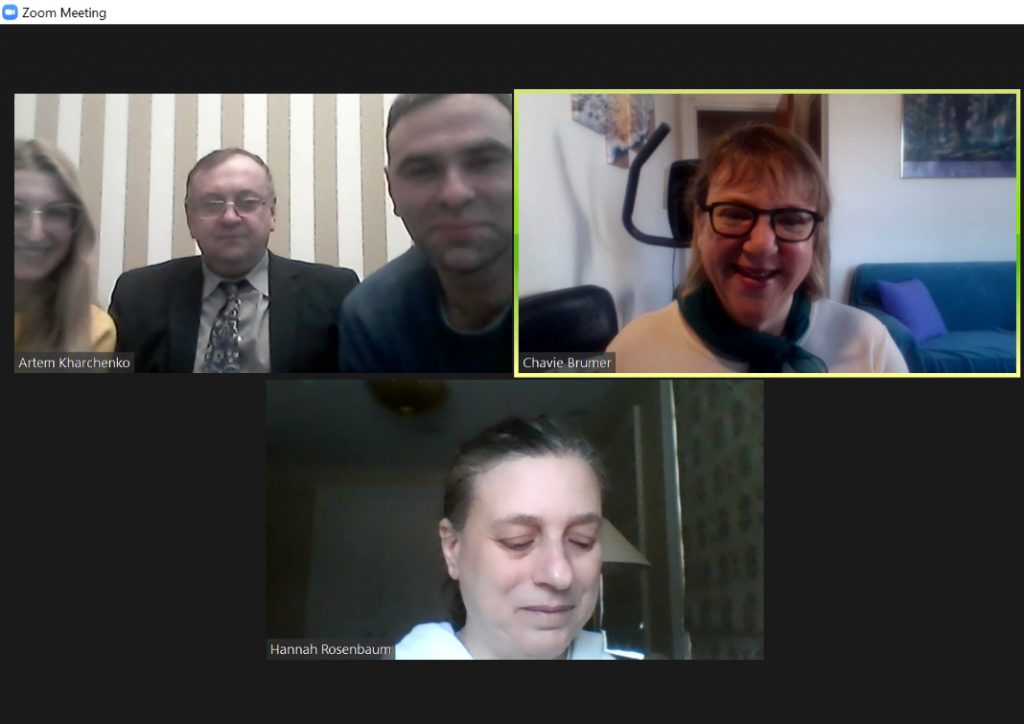 Representatives of NTU “KhPI” held an online meeting with the managers of the American Fund “The Conference on Jewish Material Claims Against Germany” (Claims Conference). They discussed the development of the partnership program — an educational course dedicated to the Holocaust. In particular, they talked about the possibility of extending the project for the 2021/2022 academic year, the prospects for its implementation in new formats (summer schools), and expanding the coverage of the project’s audience.

So, during the implementation of the program at NTU “KhPI” in the 2019/2020 academic year, students of the computer and information technologies and social and humanitarian technologies departments, as well as the Educational and Scientific Engineering Physics Institute attended several courses, in particular, “Key aspects of the history of the Holocaust: 1933-1945”. In addition, associate professor of KhPI, lecturer of the project Artem Kharchenko, together with university students, was a participant of the discussion about the events of the Holocaust in Kharkiv, which took place at the Kharkiv State Scientific Library of Vladimir Korolenko, and other events. In the summer of 2020, Artem Kharchenko made an online presentation at a workshop held in Washington (USA), where he spoke about his teaching experience.

In the 2020/2021 academic year, some parts of the courses dedicated to the Holocaust were integrated into the discipline “History and Culture of Ukraine”, which is studied by students of all specialties of the KhPI. The listeners were offered various forms of work, including excursions to places of memory, conducting video interviews, writing essays, public online discussions, etc.

The online meeting was attended by: Vice-Rector for International Relations of the KhPI Gennadiy Khrypunov, Associate Professors of the Department of Ukrainian Studies, Cultural Studies and History of Science of the KhPI, lecturers of the program Artem Kharchenko and Svitlana Telukha, managers of the American Claims Conference Fund Chavie Brumer and Hannah Rosenbaum.

In 2019 NTU “KhPI” signed an agreement with the American Fund The Conference on Jewish Material Claims Against Germany (Claims Conference) (Washington, USA) on the start of a partner university program. The project was first opened for the countries of Central-Eastern Europe and, according to the results of the competition, the universities of Budapest, Vilnius and Kharkiv (in particular, NTU “KhPI”) became the first winners. The program involves teaching courses, holding public events, participating in conferences, publishing materials on the Holocaust theme. According to the selection results, the lecturer of the NTU “KhPI” project was the assistant professor of the Department of Ukrainian Studies, Cultural Studies and History of Science Artem Kharchenko, and in 2020 the associate professor of the same department Svitlana Telukha joined the project. The course program, prepared by a university lecturer, is approved by the Claims Conference Academic Commission, which includes renowned Holocaust researchers such as Karel Berghof.

The Conference on Jewish Material Claims Against Germany Fund was founded in 1951 in Washington (USA) and today is one of the most famous organizations in the world dedicated to the memory of the Holocaust. The Fund takes care of the Jewish Holocaust victims, supports social welfare organizations, and helps to rebuild Jewish communities in Europe. An important part of the Fund’s work is assistance in the areas of the educational process and scientific research on the history of the Holocaust, support for scientists and teachers who are engaged in this topic.

The Holocaust is the persecution and mass extermination of Jews who lived in Germany, on the territory of its allies and on the territories occupied by them during the Second World War; the systematic persecution and extermination of European Jews by Nazi Germany and collaborators during 1933-1945. Along with the Armenian genocide in the Ottoman Empire, it is one of the most famous examples of genocide in the 20th century.