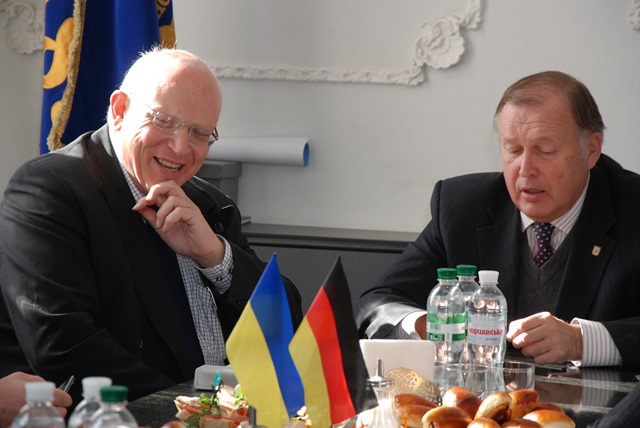 On the 16th of October 2015 the Consul General of the Federal Republic of Germany Wolfgang Mössinger visited NTU “KhPI”. He had the meeting with the rector of the university Yevgen Sokol, where development of mutually beneficial cooperation in the field of science and education between German organizations and NTU “KhPI” was discussed. As it was mentioned by Yevgen Sokol, the priority for NTU “KhPI” is to attract German colleagues to effective collaboration, and to promote Kharkiv as a peaceful and stable city of scientists and students.

Moreover, the key issue is the increasing of participation of university students, postgraduates and lecturers in international programs. This requires proficiency in foreign languages. Searching for solutions for affordable high-quality learning of German language for students and lecturers of NTU “KhPI” has become a key point of the conversation between the rector and the Consul General. Wolfgang Mössinger told about the potential opportunities for NTU “KPI” to attract new partners from German universities, state and public organizations. He also noted that he intends to come to Kharkiv on November 18th for celebration of the 130th anniversary of the university and for participation in a dialogue on enhancing cooperation in the field of language training. Just at that time, the delegation from Otto-von-Guericke University Magdeburg is also expected to visit NTU “KhPI”. In addition, the Consul promised to facilitate communication between the university and organizations such as DAAD (Deutscher Akademischer Austauschdienst — German Academic Exchange Service). During the meeting the possibility of implementing joint projects in the various scientific, technical and cultural spheres was also considered.