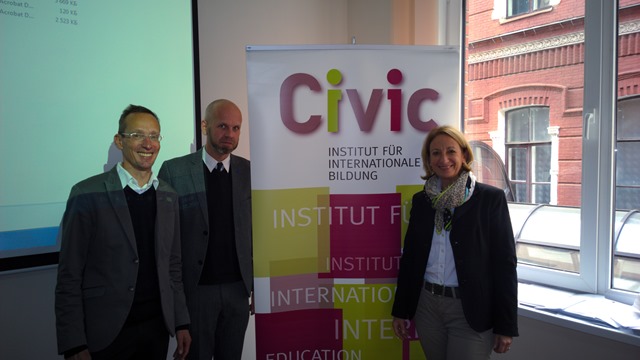 On 18-20th of October NTU “KhPI” receives a delegation from the Institute for international Education CIVIC (Germany). The delegation included Dr. Alexander Burka — Managing Director of the CIVIC Institute, Martina Eichlinger – Executive communication coach, Hathumar Christian Drost — lecturer from the CIVIC Institute.
The event was organized by Taras Danko, professor of International Management and Finance Department at NTU “KhPI”, one of the leaders of the International Business Center of KhPI.
The purpose of the visit was the conduction of university-based training seminar, “Our municipality! Effective civic engagement and urban development by communication”. According to Alexander Burka, the project is aimed at those who are interested in development of innovative cities of the future.
The project is held with participation of Institute for Foreign Cultural Relations IFA and the financial support of the Ministry of Foreign Affairs in Germany.
The training seminar consists of two parts:
1. Discussion of characteristics of urban space, its scale and urgent problems. In addition, the issues of information and citizens’ participation in the events of the city and various aspects of private sponsorship of urban development were also discussed.
2. Interactive simulation in the field of European education. It includes simulation games and simulation conferences, developed by the Institute CIVIC in partnership with leading universities in Germany. Participants could get deeper understanding of social, political and economic processes, the essence of organization of society and various aspects of its development.
In addition, there are used innovative methods based on internationally recognized principles of thinking skills.
Hathumar Christian Drost stressed that participants discuss urban development and communication in the society by the examples of similar problems of German cities.
The seminar was attended by interested teachers, students and graduates of NTU “KhPI”.
“As for me, the seminar is very interesting, as it gathered people interested in formation of the city. We can discuss the existing problems, and also try on different roles and examine cases, to find ways to solve them”, said participant of the seminar Anna Turianytsa, graduate of Faculty of Business and Finance of NTU “KhPI”,
It should be noted that such activities are conducted at NTU “KPI” not for the first time. Last year, the activities were devoted to the development of civil society, democracy and democratic education.

Reference:
The Institute for international Education CIVIC aimed mainly at development of civil intercultural dialogue skills among school children, students, minorities, different age groups, as well as people who were in the conflict zones. The main instruments of the development of these skills are simulation games and interactive teaching methods.