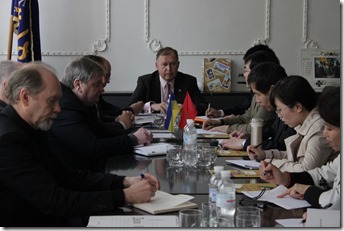 On April, 25 NTU “KhPI” was visited by delegation of representatives of the Beijing Research Institute of Automatic Space Control (China). The purpose of the negotiations is the prospects for realizing potential of joint projects in the aerospace industry, cooperation in field of education and science.

On that meeting representatives from NTU “KhPI were: Rector Yevgen Sokol, vice-rector for scientific and pedagogical work Gennadiy Khrypunov, Head of Department of systems and management processes Dmitry Breslavskiy, Head of International Relations Department — Oleksandr Goncharov, and Head of Research Laboratory of production enterprise “Hartron-Arcos” Yuri Kuznetsov. It should be noted that “Hartron” cooperates with the Chinese Institute since 1999. During this time were made several projects for the development of control systems of rocket and space technology.

Management of the NTU “KhPI” intends to prepare a program of cooperation in areas in which Chinese delegation are particularly interested in. Rector of NTU “KhPI” Professor Yevgen Sokol described the prospects of cooperation with a unique scientific center of NTU “KPI” – Scientific-and-Research Planning-and-Design Institute “Molniya”, which deals with issues related to the testing of space technology. There were figured out ways of cooperation with the Beijing Research Institute and the Department of Systems and Control Processes, Engineering and Physics Faculty of NTU “KhPI”.