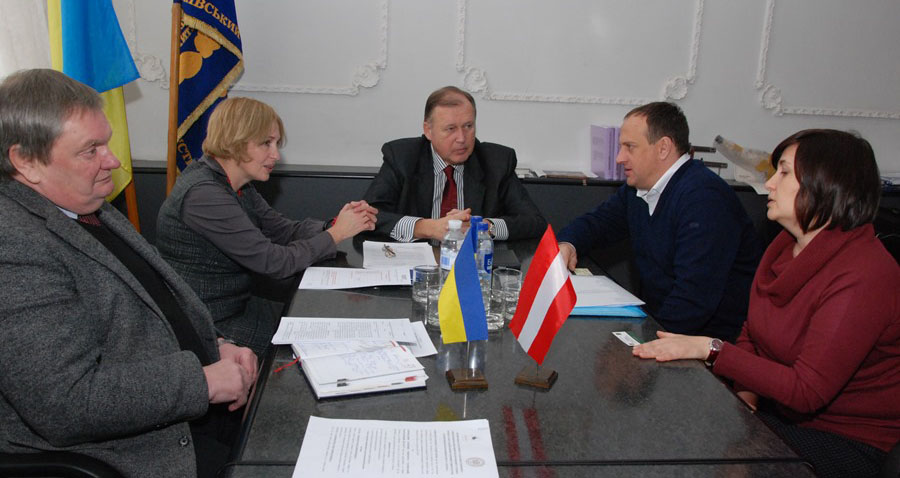 On December 2, 2016 Prof. Evgeniy Sokol, the rector of KPI welcomed Mr. Andreas Wenniger, the attaché of Austrian Embassy in charge of education and science. The purpose of this visit was to discuss the prospects of cooperation with the Austrian Academic Exchange Service (OeAD).

“Our University and the Austrian Institutions of Higher Education have been promoting joint programs for more than 20 years. Not long ago we prolonged the Agreement with Klagenfurt University that opens a new page in the long-term cooperation. We are interested in the expansion of international programs for our students to acquire knowledge and adopt best practices that are essential for contemporary world” accentuated Evgeniy Sokol.

As an outcome of this meeting, the preliminary agreement was reached on the invitation of a lecturer from Austria to KPI to teach German to our students. In this case, Kharkov will become the fourth city in Ukraine using such a format of learning the foreign language. Mr. Andreas Wenniger stressed that Austrian lecturers already deliver lectures to students in Kiev, Lvov and Chernovtsy.

Aleksandr Goncharov believes that a proficiency in the German language is a priority line in the development of our university that opens new horizons for the polytechnicians. It is true that the cooperation of KPI with the scientific centers of Austria and Germany is continuously expanded

For reference:
The Austrian Academic Exchange Service (OeAD) was set up by the universities of the country in 1961. Starting from 2000 OeAD includes not only Austrian universities, but also other institutions of higher education and the schools as well. The OeAD has a status of the nonprofit organization.
The Austrian Academic Exchange Service is the largest organization in Austria involved in the international cooperation. It makes a considerable contribution to the development of educational and scientific potential of the country and promotes its education system at the international level. Encouraging international scientific and cultural exchange and integration processes in the field of education and the academic mobility are the key tasks of this organization.

OeAD carries on the following activities:

– Backing up EU programs at the national level;
– Running scholarship programs and promoting research projects;
– Consulting and providing assistance to foreign students and scientists that come to Austria;
– Managing preliminary courses for foreign students in Vienna, Leoben and Graz enjoying the support of appropriate universities;
– Public Relations
– Reference information activities and consultancy.
NTU “KPI” highly appreciates the contribution of Austrian authorities to the development of science and education in Ukraine.