Skip to content
News:
Official position of NTU “KhPI”
“Right Way Group” is the official representative of NTU KhPI in Turkey
More than three hundred Polytechnics-Foreigners received a Bachelor Degree during the war 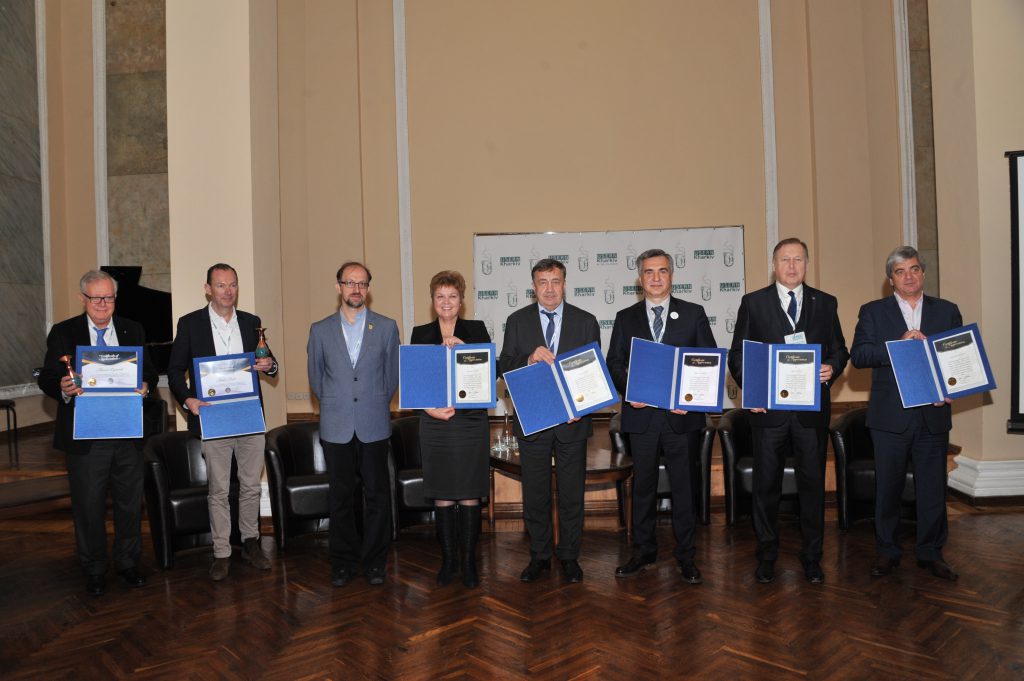 The scientists of National Technical University “Kharkiv Polytechnic Institute” participated in the II Congress held by the Universal Scientific Education and Research Network (USERN). This event united the best scientists from Ukraine, USA, Canada, Germany, Italy, Great Britain and Slovenia engaged in physics, sociology, medicine, etc. Among them were the laureates of Nobel and Abel Prizes. The Congress was held within the framework of the Science Week initiated by Yuliya Svitlychna, the governor of the Kharkiv Region and was timed to coincide with the World Science Day.
From 8 to 10 of November, leading foreign and Ukrainian scientists presented their reports, participated in the seminars and panel discussions. Among eminent guests — Prof. Markus Fischer, an expert in the field of food chemistry from the Hamburg University, he is also the author of about 300 scientific publications; Professor Evan Eichler studying the human genetics, in particular he studies the evolution of human genome and the role of it in the diseases.

During the USERN Congress, NTU “KhPI” became one of the five scientific platform for the lectures and discussions with the participation of eminent scientists. On November 9, Daniel Pauly (Canada), Maria Magdalena Titirici (Great Britain) and Saboura Ashkevarian (Iran) visited KhPI.

Foreign scientists had a meeting at KhPI. The participants from KhPI: Yevgen Sokol, Rector of NTU “KhPI”; Gennadiy Khrypunov, Vice-rector for Scientific-and-Pedagogical Work; Andriy Marchenko, Vice-rector for Scientific-and-Research Work; Oleksandr Goncharov, chief of the International Relations Department; associate professor Roman Tomashevsky, PhD, head of the Board of Young Scientists of KhPI; Oleksiy Larin,  Prof. from the Department for Machine Strength and Dynamics.

‘KhPI is pleased to participate in the USERN Congress” — emphasized Prof. Yevgen Sokol, speaking to the participants. Today, we discuss the researches on sociology, psychology and medicine at the USERN Congress. I hope that engineering sciences will take up the rightful place at the next congress”.

Yevgen Sokol stressed that interdisciplinary branches should be developed in order to become an advanced institution of higher education. He noted: “We have at our University many medicine-related specialties, in particular medical electronics, biotechnologies, etc.”

After the meeting with the KhPI leaders, the key speakers of USERN Congress delivered the reports and participated in panel discussions. Ukrainian scientists talked with the Canadian biologist Daniel Pauly. He manages the worldwide project “The World around Us”. He studies the influence of human activities on the world ocean.

Young scientists from NTU “KhPI” had also an opportunity to present their researches at the II International Congress of USERN.

According to the Rector Prof. Yevgen Sokol, the scientists of KhPI have got 14 State Prizes in the field of science and technology over the last twelve years, which is a top achievement among the Ukrainian institutions of higher education. “We believe that the future cooperation of our State with the University is definitely in the hands of young and forward-looking researchers. Such events as the USERN Congress allow us to expand international contacts, share the gained experience and knowledge with the leading scientists of the world” — stressed Rector of the University Yevgen Sokol.

The meeting began with the signing of the Memorandum of Understanding between NTU “KhPI” and the Universal Scientific Education and Research Network (USERN). The purpose — to expand coollaboration on different scientific projects. In particular, the international exchange and trainings for the scientists, information and technological exchange, joint research programs, scientific conferences, etc.

Rector of NTU “KhPI” Prof. Yevgen Sokol, in his speech at the ceremony, thanked the President of USERN Mr. Nima Rezaei and his colleagues-rectors — Liudmyla Belova (Kharkiv Regional Institute for Public Administration of the National Academy for Public Administration under the President of Ukraine), Vil Bakirov (V.N. Karazin Kharkiv National University),Volodymyr Lisovyi (Kharkiv National University of Medicine) for their direct involvement in the organization of this Scientific Assembly.

The key outcome of the Congress — the rewarding of the five laureates of USERN, young scientists that presented their scientific papers and made a substantial contribution to the development of science. Each of them was awarded the Prize in amount of $5,000. Maria Magdalena Titirici, one of the winners in the field of physical sciences, participated in panel discussions at NTU “KhPI” and she delivered the report on the subject “Hydrothermal Carbonization: An Aqueous Approach to Making Carbon from Biomass”.

Taking the Prize, she noted that she had enjoyed the reception at NTU “KhPI”: “My lecture was attended by remarkable scientists, fascinated students that put many interesting questions”. According to Maria, she was greatly impressed by the research data presented at the Congress during the two days of its work.

USERN is the Universal Scientific Education and Research Network under the UNESCO. It was set up in 2015 as an independent international organization for the purpose of peaceful and liberal development of education and scientific research worldwide. The Network unites the best scientists of the world from different scientific branches. The activities of the network are aimed at the development of new educational programs, realization of joint research projects, adhering to ethical standards in the scientific milieu.