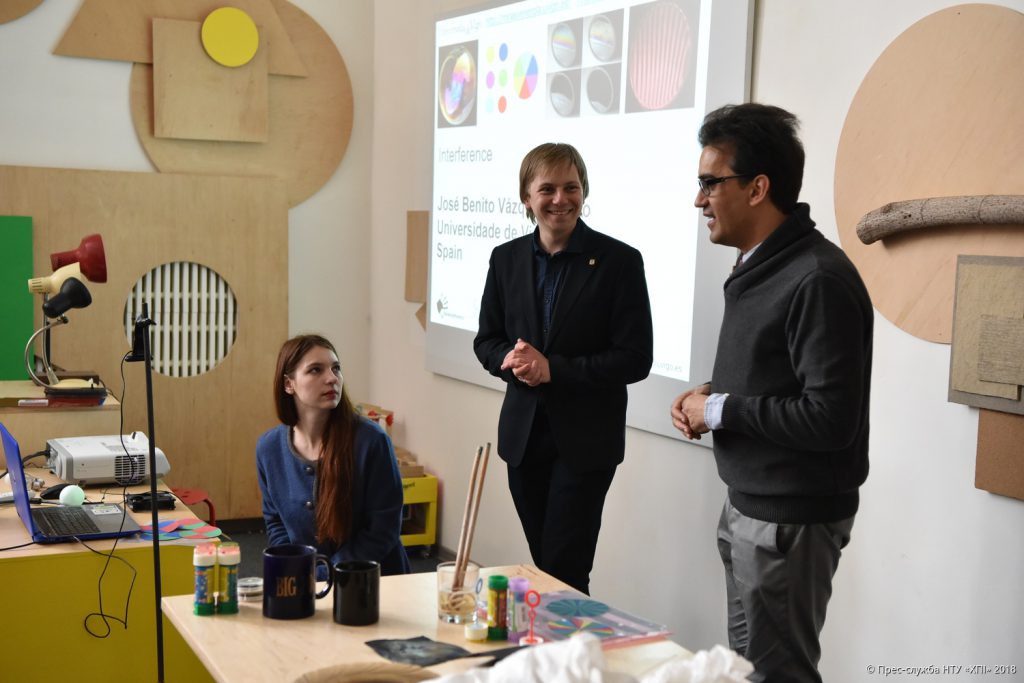 Mr. José Benito Vázquez Dorrío, vice–president of the international organization “Hand-on Science Network” and an expert in the field of applied optics visited NTU “KhPI”. He held a series of master classes for schoolchildren and their teachers within the framework of KhPI project “Holidays with Polytech and the Arsenal of Ideas in Ukraine”.

During his visit vice-president of the international organization “Hand-on Science Network” Mr. José Benito Vázquez Dorrío conducted the meeting with Yevgen Sokol, rector of NTU “KhPI”, Gennadiy Khripunov, pro-rector, Roman Tomashevski, a director of the Institute of Power Engineering, Electronics and Electromechanics of NTU “KhPI” and Oleksiy Larin, associate professor of the Dynamics and Machine Strength Department. The purpose of the meeting was to discuss the issues of science popularization and introduction of STEM-education.

“Today, lack of the education system is that students have no desire to deal with science and chose engineering professions. Many European countries also face this problem” — said Mr. José Benito Vázquez Dorrío. According to him, this problem is solved in Spain using ministerial programs that provide trainings for teachers. Today, it is necessary to find new methods of the explanation and teaching the science in a popular way combining science and its hands-on application.”

Yevgen Sokol, the rector of NTU “KhPI” noted also that the problem of science is educational programs and methods of teaching. High education is a continuation of the school education, therefore it is important for the teachers to give a hand-on idea of the science. It is necessary to spark interest in science for children giving them a motivation. If this won’t be done, then the education has no future”— said Yevgen Sokol.

During the talks a proposal on cooperation and promotion of STEM-education was initiated including the establishment and development of contacts between the scientific schools of Spain and Ukraine. Later on the same day Mr. José Benito Vázquez Dorrío, an expert in the field of applied optics held two master-classes:

Information:
Mr. José Benito Vázquez Dorrío is a well-known science promoter, PhD in physical sciences and an expert in the field of applied optics. He works for the School of Mountain and Power Engineering of the University in the city of Vigo (Spain), he is the associate professor, a researcher and he is also in charge of the management of research education, training of the teachers and maintenance of educational projects. He is a vice-president of the international organization “Hand-on Science Network” and he is also an expert in the field of applied optics. The main goal of this organization is to develop the scientific literacy though a wide application of the hand-on research. His course “Practical Studies of Physics” won the IBM Prize in the nomination “Science on Stage”. Today Mr. José Benito is a developer of more than 200 experimental events that are used for the training courses of a different level (universities, secondary schools, etc) including the studies of different subjects related to physics.

The abbreviation STEM stands for “Science, Engineering and Mathematics”. This is the interrelation and close contact of the fields of knowledge that allow a child to understand a complicated and an extremely interesting surrounding world in its entire variety. Thanks to the STEM–approach the schoolchildren can delve into the logics of phenomena that occur around us, understand their interrelation, study the world systematically and develop the intellectual curiosity, engineering type of thinking and the ability of coming out of critical situations. It is a cardinally new level of the child’s development.