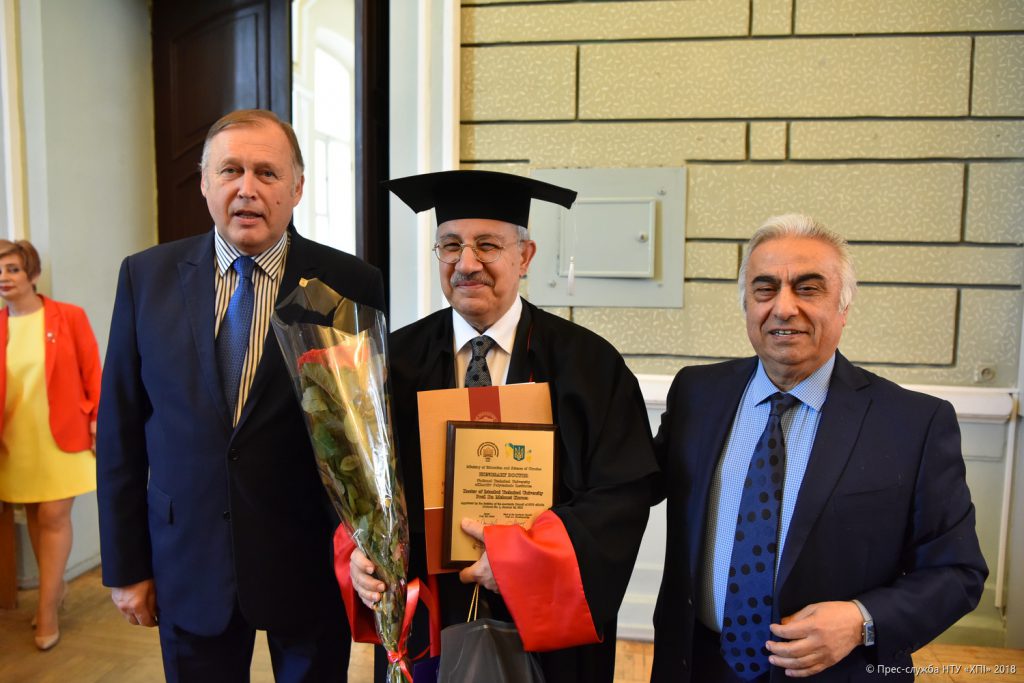 The diploma and gown delivery ceremony for the Honorable Doctor of NTU “KhPI” was held on May 4 before the Academic Council of the University. When delivering the diploma, Prof. Yevgen Sokol, rector of NTU “KhPI” noted that this title is the acknowledgement of great services of Mr. Mehmet Karaca in the development of cooperation between the Universities and his contribution to the development of international research programs. “In February we set up the Coordination Center for Science and Technology Research to realize research projects of NTU “KhPI and ITÜ and commercialize intellectual groundwork. Today the specialists hold meetings to approve plans for joint investigations and projects”.

Mr. Mehmet Karaca, rector of İTÜ thanked Prof. Yevgen Sokol, rector of NTU “KhPI” and the employees of KhPI for the rank awarded to him. “It is a great pleasure to be the Honorable Doctor at such a university. Although we teach in different languages, but we understand each other. We speak the same language, the language of science and education. This removes the boundaries and therefore we will strengthen our relations in the future,” said Mehmet Karaca.

During the visit to KhPI the representatives of İTÜ, rector Mehmet Karaca, director of the Institute of Informatics Ertuğrul Karaçuha and the head of Electronics and Communication Engineering Department İbrahim Akduman had talks with Yevgen Sokol, rector of the Polytech University. The meetings with the scientists of Polytech were also arranged to make up plans for the development and realization of joint projects.

This visit resulted in internship arrangements for the teachers and students of NTU “KhPI” at İTÜ, making up the schedule for scientific works presentation by scientists of KhPI at the Istanbul Technical University and promotion them for the world market of intellectual property.

We mind that NTU “KhPI” and İTÜ signed the Protocol of Educational and Scientific Cooperation between the Universities in July 2017.  In February 2018 NTU “KhPI’ and İTÜ have opened together the Ukrainian-Turkish Coordination Center for Scientific and Technological Research, and signed the cooperation agreement between universities. The agreement states joint researches and participating in the developments of innovation technologies in the field of electronics, mechanical engineering, space, aviation, etc.

Professor Dr. Mehmet Karaca has been the rector of Istanbul Technical University since August 2012. He graduated from the Department for Liberal Arts specializing in Meteorology (Istanbul Technical University); he defended his Master’s degree and PhD at the University of California in Los Angeles (1985, 1991). He is an academic counselor for the National Geographic–Turkey and the member of the Committee on awarding Elginkan Foundation Science and Technology prizes. Scientific interests: atmospheric and oceanic simulation, climate changes, paleooceanography, disaster management and the air quality simulation.

Istanbul Technical University (İTÜ) provides 39 specialties at 13 departments, and 39 postgraduate and doctorial programs. In addition, the University runs 360 laboratories and 13 research centers. Twenty-three specialties have the accreditation in the USA and it allows the students to participate in exchange programs and obtain dual degrees. The University gives training in such fields as mechanics, electrical engineering, electronics, chemistry, metallurgy, computers, informatics, shipbuilding, aeronautics and also architecture, art, design and music. In Istanbul University located Technology Park, that operates successfully and has the money turnover of 1 billion dollars and more than 200 companies work for it, said rector of the   University Mehmet Karaca. According to his words one third of the graduates are involved in the research done by these companies.