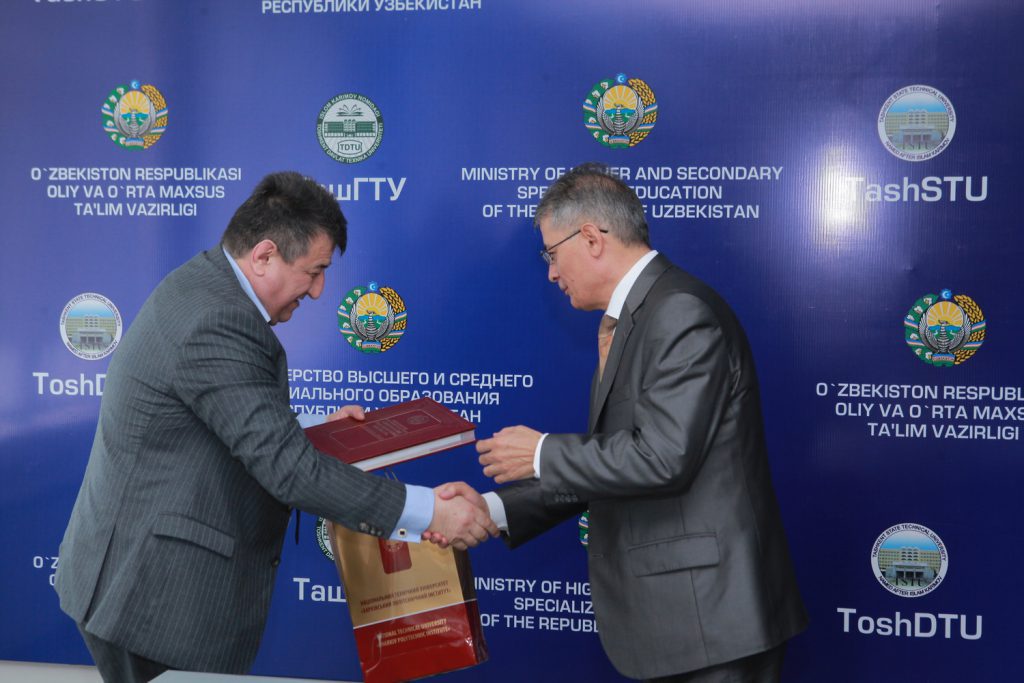 The delegation of NTU “KhPI” visited Uzbekistan. A meeting was held during the visit with the administration of the Tashkent State Technical University named after Islam Karimov (Tashkent State Technical University), as well as with representatives of the leading firm Inside-A, which is engaged in attracting Uzbek youth to study at KhPI. The purpose of the trip is to conduct negotiations on the establishment of bilateral cooperation in the field of education and science, the implementation and conduction of joint educational programs (including double diplomas for bachelors and masters), the organization of general scientific research, the double leadership of postgraduate studies, counseling doctoral dissertations.

The Ukrainian side was represented by two vice-rectors of NTU “KhPI”: Magomediemin Gasanov and Oleksandr Trush, their assistant for work with foreign students Issam Shahin, and also the head of the economic section of the Embassy of Ukraine in the Republic of Uzbekistan, Yulia Kolinko.

It was proposed to conduct a detailed study of possible areas of cooperation, the definition of faculties, departments and specific contact persons for the preparation of draft Agreements and Road Maps.

The Ukrainian side conveyed a personal invitation from the rector of NTU “KhPI”, Professor Yevgen Sokol, to the rector of Tashkent State Technical University, Professor Sadritdin Turabdjanov to visit Kharkiv Polytech in the near future in order to sign a cooperation agreement.

Also, the delegation of NTU “KhPI” held negotiations with representatives of the company Inside-A, which is engaged in attracting Uzbek youth to study at the Kharkiv University. Thanks to the cooperation with this company, the first 29 students from Uzbekistan appeared in KhPI. According to Vice-Rector Magomediemin Gasanov, it was agreed that in the new academic year seventy more students from this eastern country will study at the Kharkiv University. In addition, a meeting of representatives of NTU “KhPI” with the parents of Uzbek students studying at Kharkiv University was held – they were told about the advantages and features of education at KhPI, high quality educational services, answered questions of interest.

It should be noted that in addition to working meetings for the delegation of KhPI, who visited Tashkent, a large excursion program was prepared. The city, which is called the “Star of the East”, left the most vivid and positive impressions of polytechnics.