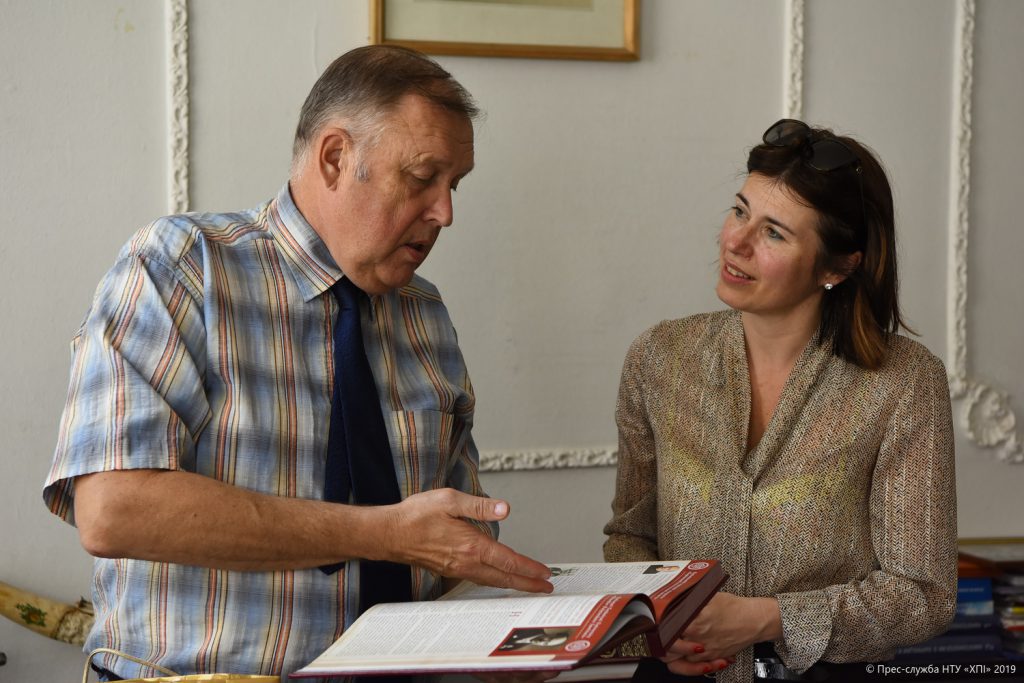 On May 29, a representative of the Belgian Chamber of Commerce and Industry of VOKA, Jill Suetens, visited NTU “KhPI”. The goal is to familiarize with the Business Incubator project, which operates on the basis of the KhPI, with the USAID Competitive Economy of Ukraine (CEU) program, which provides it with financial and technical support. With the administration of the university negotiations on cooperation opportunities, acquaintances with the activities of the Polytech were held during the visit.

Rector Yevgen Sokol introduced the university, talking about its main areas, scientific schools. He also noted the work of the university in the direction of implementing start-ups: “The most difficult problem not only of our university, but of Ukraine as a whole is the lack of experience in commercializing intellectual property projects. The last steps of KhPI are aimed at cooperation with states, organizations that have extensive experience in this field. We have an agreement with the Istanbul Technical University, with various domestic investors, for example, Chernovetskyi Investment Group, with the USAID program”.

Yevgen Sokol said that cooperation with the USAID American program led to the creation of an All-Ukrainian Business Incubator, whose representative offices were opened in Kiev (based on the KNU of Shevchenko) and Kharkiv (based on NTU “KhPI”): “The first stage has already passed. A total of 176 projects were submitted and, after selection, Kharkiv is represented by two works – from KhPI scientists. Last week, all participants studied at the American House in Kiev, and now, based on the KhPI, they will continue to bring their projects to the final stage for 4 months”.

The representative of the Belgian Chamber of Commerce and Industry VOKA Jill Suetens noted that she had heard about high technology in Ukraine – this was one of the reasons for visiting Kiev and Kharkiv. “I came as a representative of the mission of the Belgian Chamber of Commerce and Industry, but also to find out more about your technologies and whether we can organize such a mission next year. I was impressed that in Kharkiv there are a lot of young people, talented people. In addition, I heard that there is a high level of education. We have experience in conducting trainings around the world. We are ready to share the knowledge and experience that we have, to conduct coaching sessions in Ukraine” said Jill Suetens.

In completion of the negotiations, the rector Yevgen Sokol noted that it is important for KhPI to gain experience in creating start-ups from foreign specialists, since this will allow the university to move to a new level of creating an innovative product and its implementation.

Business Incubator was opened in Kharkiv on April 5, 2019 on the basis of NTU “KhPI”. The goal is to provide mentoring support not only for regional but also for all-Ukrainian startups, as well as training in technologies for their promotion and financing in the domestic and international markets. Its peculiarity is that it becomes part of the international innovation ecosystem and is aimed not only at “youth start-ups” and IT (like most of the existing ones), but also at commercializing the fundamental and technological developments of universities. The second such business incubator is implemented in Kiev on the basis of KNU of Shevchenko. USAID’s Competitive Economy of Ukraine (CEU) program provides financial and technical support for this project.

You can read more about the opening of e Inc Business Incubator by clicking on the link on the page on Facebook and the website.

The Chamber of Commerce and Industry Voka-Antwerp-Waasland (Kingdom of Belgium) is an organization that unites more than 3,000 corporate members of enterprises in the region in two districts of Antwerp and Waasland, which operate in different sectors of the economy. The goal is to stimulate economic activity, to contribute to a better entrepreneurial climate in the region through lobbying, cooperation and the provision of specific services for business. There are 6 Voka – Chambers of Commerce and Industry (CCI) in Flanders. Together with the Flemish Employers Association, these 6 CCIs from the Voka alliance unite more than 18,000 enterprises from all sectors of the Flemish region.