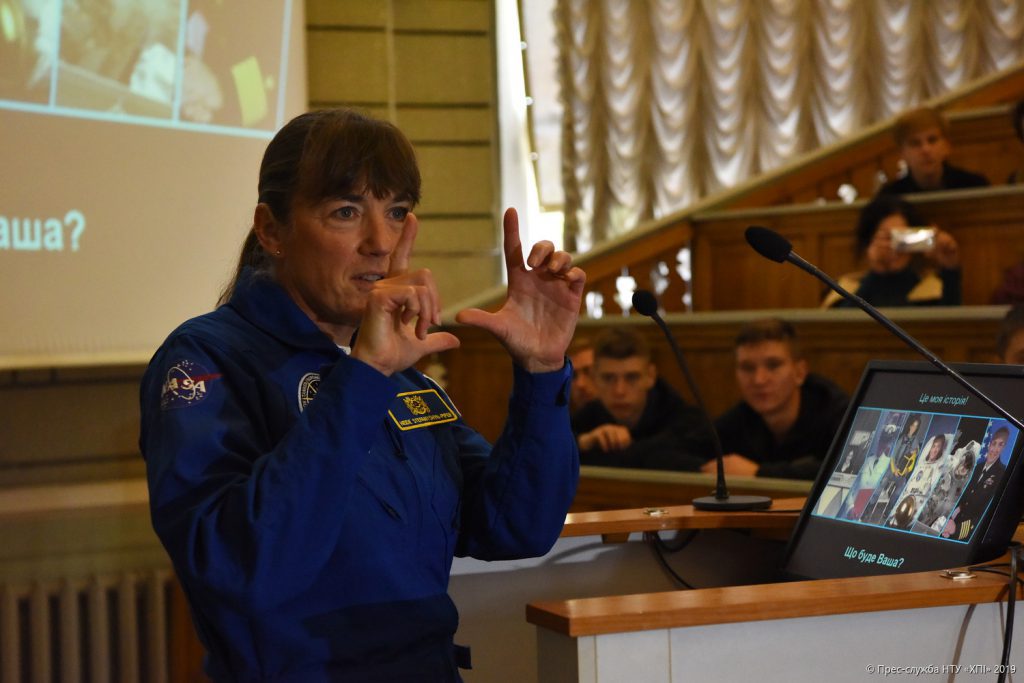 On October 9, Heidemarie Stefanyshyn-Piper an American astronaut with Ukrainian roots visited NTU “KhPI”. The visit was coincide with the World Space Week. The main mission of the astronaut is to attract Ukrainian youth to the study of the natural sciences: technology, engineering, mathematics, and others. A graduate of the Massachusetts Institute of Technology Heidemarie Stefanyshyn-Piper met with students and teachers of KhPI, and she told how she chose the profession of an astronaut, also about life and work on board a space station, scientific activity, after that she answered a lot of questions from the audience. She also talked with the administration of the university, visited the historical museum of KhPI and held an autograph session. In addition, on the same day in the lobby of the Main Building of the Polytechnic, it was possible to “walk” on the surface of the moon using the Moon Walk VR hardware-software complex.

The lecture of astronaut Heidemarie Stefanyshyn-Piper was held in a large audience of KhPI, where not only students, teachers, KPI scientists, but also other people were gathered together. “It is a great honor for me to be here, to have the opportunity to chat with you, to show how everything happens in space. When I was in high school, I knew mathematics well. At first I didn’t understand who I could become, but I knew for sure that I didn’t want to be a professor. I entered the Massachusetts Institute of Technology (specialization is mechanical engineering)”, said Heidemarie. She noted that prior to the profession of an astronaut, she had experience in the navy and an attempt to become a pilot. “I had to convince NASA twice that I could become a real astronaut. Then I found out that very few astronauts qualify the first time. From the moment I was admitted to NASA, I served there for 13 years and visited space twice”, said Heidemarie Stefanyshyn-Piper. She also showed a video about her second stay in space and the stages of the launch of the space shuttle. “The test begins at the moment when you understand that gravity is no longer acting, and everything happens in a completely different way. Even the simplest thing is to get out of the chair. When you remove all the fasteners, but still continue to sit in the chair. You begin to get used to how to push, with what strength, and in which direction”, commented Heidemarie. She also answered questions of guests about space, the existence of UFOs, the effect of such flights on the body, its recovery after being in space, and others. In addition, in the lobby of the KhPI building was located the hardware and software complex “Moon Walk VR”, manufactured by the Kharkiv “Yuzhnoye” State Design Office. All visitors to the event could virtually walk along the surface of the moon and around the lunar base.

After that there was an excursion to the historical museum of NTU “KhPI”, during which Heidemarie Stefanyshyn-Piper was told about the main achievements of the University. An autograph session of the astronaut was held here, where everyone could take a picture with her and get an autograph.

As part of her stay at the Kharkiv Polytechnic University, the American astronaut also met with the administration of the university, representatives of the Scientific Research Unit and the Council of Young Scientists of KhPI. Vice-rector Andriy Marchenko noted the importance of this visit for the Polytechnic University, spoke about the scientists’ contribution of university to the development of the rocket and space industry both in Ukraine and in the world. He handed Heidemari Stefanyshyn-Piper souvenirs from KhPI, as well as a library card to the University’s Scientific and Technical Library.

Heidemarie Stefanyshyn-Piper – the first astronaut of Ukrainian descent, who visited outer space, and the eighth woman to overcome interplanetary open spaces. It made two space flights lasting 27 days 15 hours 36 minutes and 02 seconds, performed five spacewalks with a total duration of 33 hours 42 minutes. Heidemarie Stefanyshyn-Piper became the second person in outer space to deploy the national flag of Ukraine in Earth orbit. The first person with the Ukrainian flag aboard the American shuttle Columbia as part of the STS-87 mission in 1997 was our countryman, Hero of Ukraine Leonid Kadeniuk. Being a member of the Supervisory Board of NTU “KhPI”, the astronaut greatly supported the Polytech, opening up modern scientific laboratories at the university, taking part in various events of the university and presenting his new books.

Ukrainian, American and German – this is exactly what nationality Stefanyshyn-Piper defines for herself. Her father is of Ukrainian origin; Mykhaylo Stefanyshyn was born in the village of Yakimov, Kamenka-Bug district, Lviv region. In his youth, he immigrated to the United States, married a German, but raised children in Ukrainian traditions. Stefanyshyn Piper was born and has lived all her life in the United States. However, she attended the Ukrainian church, studied Ukrainian traditions and language, and, after her first visit in 2007, returned to Ukraine again.

More information about Stefanyshyn-Piper you can find at: https://www.nasa.gov/astronauts/biographies/former.