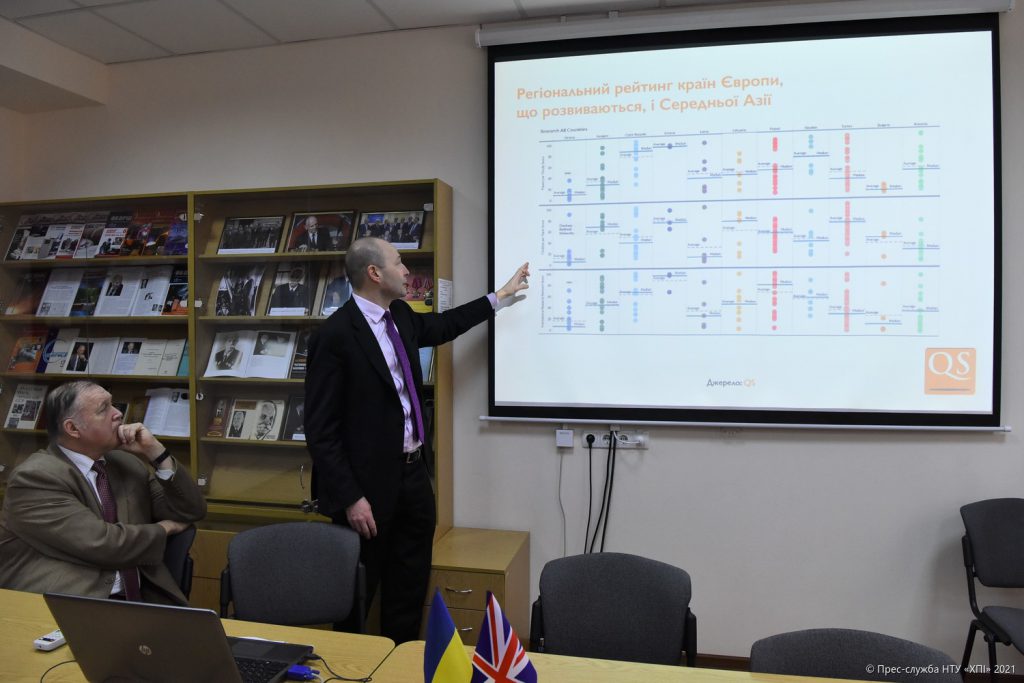 On February 5, 2021 Sergii Khristoliubov, the regional director of the British Ranking Agency Quacquarelli Symonds (QS)  for the countries of Eastern Europe and Central Asia paid a visit to NTU “KhPI”. The purpose of his visit was to get an insight of the University and discuss the issues relating to a further advance of the Kharkov Polytech in the QS World University Rankings where KhPI holds leading positions among Ukrainian Institutions of Higher Education.

Within the framework of this visit, a meeting of Sergii Khristoliubov and Yevgen Sokol, rector of NTU “KhPI” was conducted, the presentation of the Science and Technology Library of the University was held and special attention was paid to a unique NTU “KhPI”s Program “Innovation Campus” intended for IT-students. It is the first project that is realized in Ukraine by the State University combining IT-training, the entrepreneurship school and coworking.

Prof. Yevgen Sokol, rector of NTU “KhPI” paid special attention to the participation of the Kharkov Polytech in the promotion of the startup movement in Ukraine. For this purpose, the University set up the «SPARK» Startup Center that is the first center in Ukraine opened for young scientists, students and school-children. The main purpose of this Center is to provide support for the concepts at all stages of their development starting from the concept formation through to its commercialization.

Sergii Khristoliubov, the regional director of the British Ranking Agency Quacquarelli Symonds (QS) thanked the management of KhPI for the hospitality and noted that he is delighted to cooperate with the famous university that holds a deserved place in the Rankings of the best world universities.

“We try hard to potentiate the international recognition of Kharkov Polytechnic University. This is how we see our role, because the Universities need to work hard to have appropriate rankings. When the students visualize the rankings they realize their opportunities from the standpoint of their professional development in those branches of knowledge in which they have concern” – noted Sergii Khristoliubov. He underlined strong performances of NTU “KhPI” in the international rankings including, in particular academic reputation, the employer position, the relation between the number of the students and the academic staff of the University. In addition, Sergii Khristoliubov, the regional director of the British Ranking Agency Quacquarelli Symonds (QS) informed the audience that new Subject-Specific Rankings will be issued in the nearest future that will assess computer technologies and information systems and KhPI has a great potential for the participation.

The participants of the meeting discussed the prospects for the advance of NTU “KhPI” in the World University Rankings and the issues of further cooperation.

Reference: The delegation of NTU ‘KhPI’ was represented by rector Evgen Sokol, pro-rectors Andriy Marchenko and Gennadiy Khrypunov, head of the Research Department of the University Georgiy Lisachuk, and his deputy Ruslan Krivobok and also Aleksandr Vasiluk, chief deputy of the Department for International Relations.