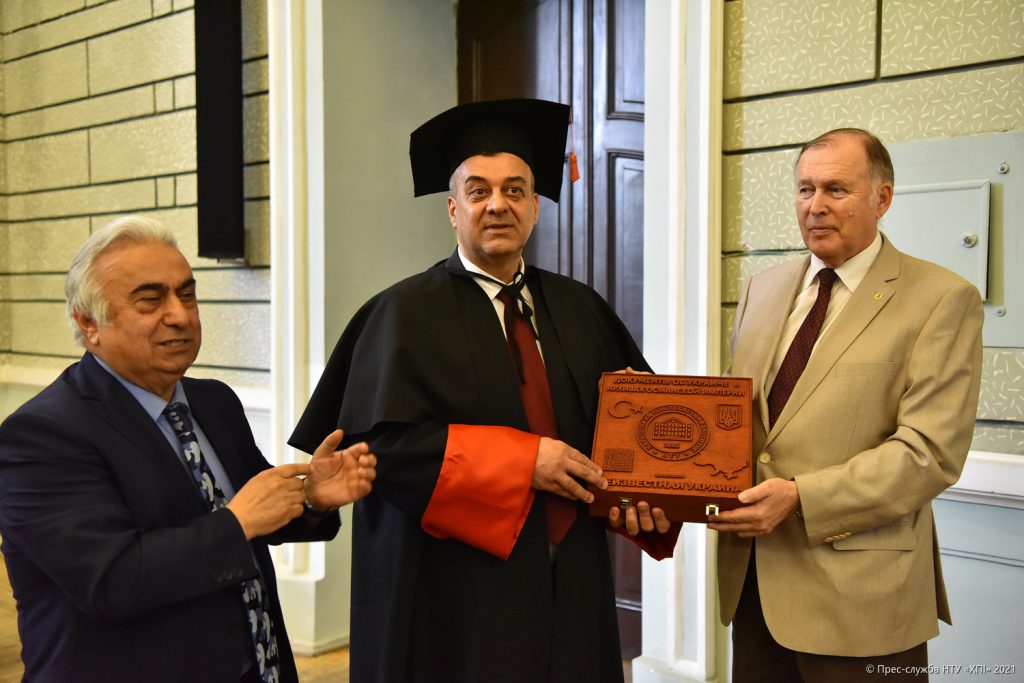 KhPI held solemn events devoted to the 600 hundredth anniversary of the history of mutual relations that were once established between the Ottoman Empire and Ukraine. A unique archive that has been collected by the Ottoman Empire on the cooperation between Ukraine and Turkey over the last six hundred years was handed over to the Kharkiv Polytech at the meeting of the Academic Council. The participants of this historical event were honorary guests, in particular the representatives of the Ministry of Education and Science of Ukraine, the representatives of the Committee of the Supreme Council of Ukraine in charge of education, science and innovations and the responsible executives of the Kharkiv Regional Public Administration.

The digitized archive that counts more than 60.000 documents was drawn up by the Istanbul University that is the NTU “KhPI” partner. The historical documents of that period were studied by the Professor of Istanbul University Mr. Mehmet Hakan Saglam at the archives of the Turkish Republic. During the meeting of the Academic Council of NTU “KhPI”, the Turkish scientist was bestowed a title of Doctor Honoris Causa of the Khakiv Polytech.

He delivered also a report on the history of mutual relations between the Ottoman Empire and Ukraine. The Turkish scientist noted that the archive of the Ottoman Empire is one of the largest in the World. “The Empire dissociation resulted in the origination of 63 states. The archives have all appropriate information thereon. We managed to find about one hundred thousand documents and if we continue our work their count may vary in the range of 200 to 300 thousand. These documents will allow us to strengthen mutual relations between our two countries and develop new educational and scientific projects” – said Mehmet Hakan Saglam. According to his version, the Ottoman State kept record of even insignificant events of social, political and economic life. The archive counts more than 60 thousand documents. The Turkish scientist stressed that KhPI may invoke the setting up of the Archive Research Center. He believes that in the future many students working for their master’s and /or doctor’s degrees will have an opportunity to do research in different fields disclosing many new pages of the Ukrainian history.

From the standpoint of Prof. Yevgen Sokol, rector of NTU “KhPI” the transfer of the archive of the Ottoman Empire to NTU “KhPI” is a weighty event indeed. “This gift is of great value not only for the Kharkiv Polytech, it is of great importance for the entire Ukraine. And it is of paramount importance to write our history based on verified data given in archive documents. Our friendship with Turkey comes from olden time. A few years ago the KhPI set up the Ukrainian–Turkish Scientific Center that rapidly develops and it helps us to solve many important problems of cooperation with the Turkish higher school. I would like to express our gratitude to Eldar Veliev, director of this Center who greatly assisted us in coming close to this event. And today we embarked on one more path that helps us to get an insight in the history of mutual relations between the Ottoman Empire and Ukraine. We have a lot of work to do in the future for all the documents were written in the Ottoman language. We would greatly appreciate the consent of Mr. Veliev who has a good command of Turkish to head this new Center in charge of the archives. We also plan to involve the experts from the National Academy of Sciences. I am thankful to all the participants and I would like to wish a fruitful cooperation for the welfare of Ukraine and Turkey” – said Rector Yevgen Sokol.

Honorary guests, in particular the representatives of the Ministry of Science and Education of Ukraine, the Committee of the Supreme Council of Ukraine in charge of education, science and innovations and the responsible executives of the Kharkiv Regional Public Administration (vice chairman of the KhRPA Roman Semenukha) paid their visit to NTU “KhPI” to participate in this rather exciting event. The Minister of Education and Science of Ukraine Serhiy Shkarlet took the floor. “I am glad to be today here at alma mater that trains the engineering elite for our state. It is a great event. I greatly appreciate your work, Mr. Mehmet Hakan Saglam, that was done over the course of several years. The number of handed over archive documents impresses deeply.  The fact remains that Ukraine was neighboring upon the Ottoman Empire. Pleasingly, the NTU “KhPI” develops! Thank you for the opportunity to participate in the meeting of the Academic Council of the University. I would like to congratulate Rector Yevgen Ivanovych Sokol on such a valuable historical gift for it reflects the basic events of the mutual relations of our states. It lays also the groundwork for the development of our common history! I would like to congratulate all of us on this remarkable event and I thank sincerely for the opportunity to be here within these legendary walls” said Serhiy Shkarlet, the Minister of Education and Science of Ukraine during his speech.

Taking the floor at the meeting of the Academic Council, the first deputy head of the Committee in charge of science, education and innovations Alexander Lukashev noted the strength of the search for historical roots of the mutual relations between the Ottoman Empire and Ukraine. “Today Ukraine defined for itself the vector for the Eurasia integration”. Actually, we return today to those origins that have been harnessed for centuries by our ancestors. We watch the rapid economic, scientific and technological growth of the Turkish Republic and we will boost and extend the cooperation for the purpose of the development of the Ukrainian science. Particularly, the development of the international cooperation is the priority of the Ministry of Education and Science of Ukraine and an important movement vector of the Committee of the Supreme Council of Ukraine in charge of education, science and innovations”, – noted Alexander Lukashev.

During the solemn ceremony, Leonid Tovazhnyanskyy, the chief of the Scientific Council of NTU “KhPI” read out the letter of the ambassador of the Turkish Republic to Ukraine Mr. Yağmur Ahmet Güldere that stressed the extraordinary importance of this event. In particular the letter states the following: “We welcome the efforts taken to highlight historical relations between the countries and the people and we hope for an increase in the number of scientific papers that would thoroughly study general historical issues. The Embassy of Turkey keeps a close eye on the events that bring closer our people and countries and it will take every effort to promote further development of our friendly relations”.

The electronic copies of historical documents in the amount of 60. 000 that were kept by the archives of the Ottoman Empire were handed over to the Science and Technology Library of the Kharkiv Polytech.