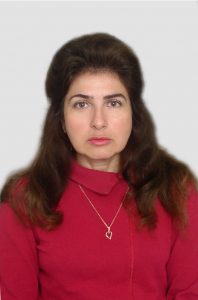 Head of The Department

Department of Theoretical Electrical Engineering was headed at different times by Professors V.L. Benin, Yu.R. Dryker, P.M. Yegorov, V.P. Samsonov, O.L. Rezynkin. Currently Department is headed by Professor M.M. Rezynkina. The achievements of the Department staff in science include fundamental works in electrical engineering by Professor P.P. Kopnyayev, development of operational calculations by O.M. Yefros, fundamental works on automatic frequency control of power plants in power systems of the Soviet Union and Ukraine by Professor V.L. Benin, applied theory of control systems and diagnostics of diesel electric units by Professor A.M. Borysenko, participation in the international space projects under guidance of senior researcher M.M. Hlybytskyi. Now scientific researches of the Department are connected with mathematical and physical modeling of electrical physical processes in different mediums upon electromagnetic fields influence for solution of the electromagnetic and Bio electromagnetic compatibility problems.

Main directions of scientific research activity of Theoretical Electrical Technique Department are related to influence of electromagnetic fields on technical and biological objects with regard of their non-uniform electric and magnetic properties and complex spatial configuration. The researches on working out improved methods of mathematical modeling of electromagnetic fields, in particular, finite volumes method are performed. The mathematical models for numerical calculations of electromagnetic fields in the dielectric, magnetic and weakly conducting medium containing conductive inclusions of complex spatial configuration, which can vary in space and time domain, are elaborated.
Works of the Department are related to usage and development of numerical calculation methods such as the method of absorbing boundary layers on solving the tasks of homogeneous electric and magnetic fields influence on objects that are located in media with open borders. Usage of the analytical expressions for the scalar electric and vector magnetic fields potentials that take into account their decrease around the conductive thin structures (e.g. channels of electrical discharges or magnetic wires) enables calculations of the distributions of quasi-static electric and magnetic fields in the systems with such elements. For this, the finite volume method with calculative grid step of several orders of magnitude larger than the diameter of the structures under consideration was used.
The methods of calculation of electrical physical processes in the extensive grounding systems of power facilities such as high voltage substations, with regard of the mediums electrical resistance changing versus the leakage current have been elaborated. As a result of the carried research, methods and software for calculation of the electrical parameters of physical processes that occur in the elements of complex grounding systems of energy facilities in such emergency regimes as lightning attachment and short circuit have been created. It provides possibility of determination of the potentials distribution, the resistance to leakage current, the touch and step voltage levels in the studied energy facilities. Thus, it enables determination of the areas in which safe levels of voltages and resistances are exceeded, which allows to develop measures of energy facilities protection systems modernization. The results of these works are used at determination of the reliability of protective grounding systems of the power facilities of the Energy Ministry of Ukraine.

The works of the Department are also connected with modeling of electromagnetic fields influence on biological objects. The methods of calculation and corresponding software for analyzing of the electric and magnetic fields distributions around and inside a human body model taking into account its real three-dimensional geometry and electrical properties of biological tissues have been created. The numerical means for calculation of electromagnetic fields in a human body (including neurons in the brain) with regard of their real heterogeneous configuration and electrical parameters allow to prove scientifically the levels of electric fields that are dangerous to humans and to identify areas which are safe for staff. The results of the carried researches have been used in Kharkov Research Institute of Occupational Hygiene and Occupational Diseases at developing the standards of the safe electric and magnetic fields levels.

Fractal theory was used for modeling of the process of electrical aging and degradation of polymer insulation of high-voltage cables. The methods of statistical modeling to describe electrical physical processes in solid polymeric media around the emerging defects (treeing) upon influence of strong electric fields, the configuration of which varies in space and time domains have been elaborated. The method of determining the stage of treeing growth in polymeric insulation of high-voltage cables in strong electric fields on the measured distributions of partial discharges phases occurrence frequency and on their fractal characteristics has been created. It enables obtaining a correlation between the shape of treeing and stage of insulation degradation, which correlates with the probability of breakdown.
A numerical calculation methods of low frequency magnetic and electric fields in screening systems of complex spatial configurations which provide minimal penetration of the fields and low corona levels have been developed. These results are used to elaborate systems of screens against corona of the electrostatic ion accelerator, which operates in Madrid. With the help of the elaborated mathematical models, distributions of the electric fields in metal hulls influenced by the external high-voltage electric fields were investigated on the compliance with the requirements of safety of the instrumentation and control systems of nuclear power plants.

Researches on physical and mathematical modeling of the probability of high voltage discharges strikes at the grounded rod electrodes modeling means of lightning protection, depending on corona discharges presence or absence and their intensity are carried out. Such works are aimed at creation of the improved means of protection against lightning and the methods of corona losses reducing.
Researches in the field of electromagnetic compatibility and sustainability of technical objects to influence of electromagnetic fields of natural and artificial origin are performed. Experimental and theoretical studies on the formation of shock electromagnetic waves, their propagation in layered ferroelectric – magnetic composites and other non-linear environments are carried out.

Research works on contracts “Design and manufacture of setup for tests by the nominal currents”, “Verification of the ohmic voltage divider ODN-1,2 and capacitive voltage divider EDN-1,2 that are part of the device of the HVPM type for high voltage pulses measurement” were carried out.

The works by the theme “Development of physical and mathematical models of the electrical physical processes in heat-resistant radio frequency absorbing coatings” was done in 2014 – 2016. The work by the theme “Mathematical and physical models of the processes of high-frequency electromagnetic waves propagation in ferroelectric – ferromagnetic media” (2017 – 2019) is performed.

Qualifications and Areas of Specialization