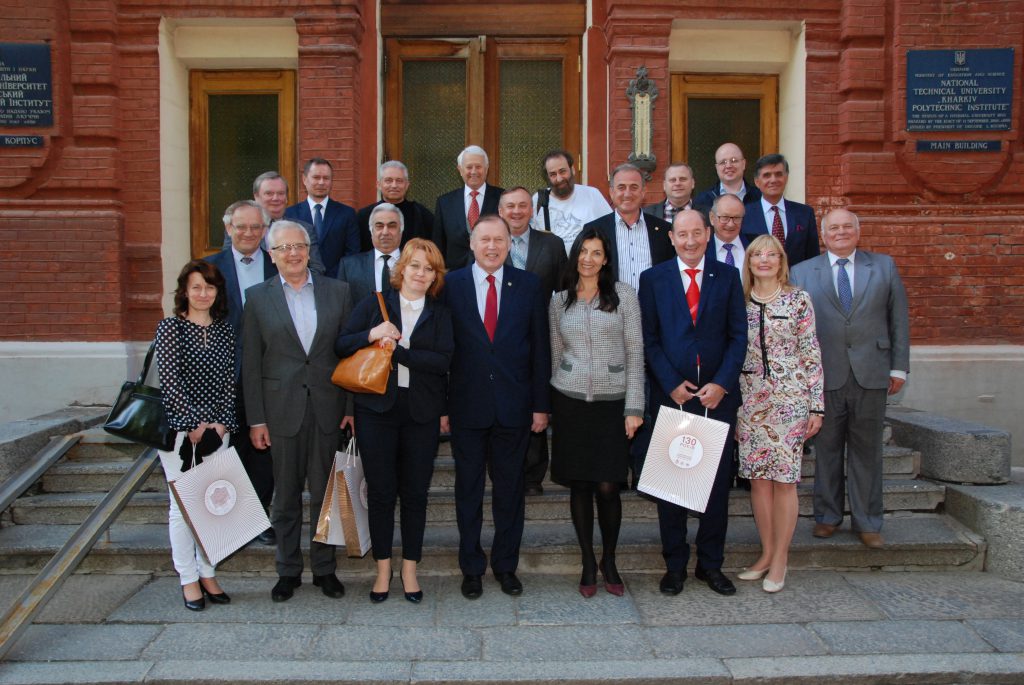 The Jubilee  XXV International Theoretical and Practical Conference “Information Technologies: Science, Engineering, Technology, Education and Health” (MicroCAD-2017) completed  its work at the National Technical University “Kharkov Polytechnic Institute” Throughout the period of May 17 -19 the scientists from different countries of the World  delivered their reports and discussed the prospects for their future cooperation. “The MicroCAD conference is one of the leading theoretical and practical forums in the European Scientific Space”-said Prof. Yevgen Sokol, rector of NTU “KhPI. “I enjoy this conference because we open it together with the rector of Miskolc University Torma  Andras, and  this forum became a reality due to the cooperation with this Hungarian University that laid a foundation for this scientific forum. In 1993 the rectors of both Universities opened it at the assembly hall of the Kharkov Polytech.

Over the period of 25 years the Universities of Magdeburg (Germany), Petrosani  (Rumania), Poznan (Poland) and Sofia (Bulgaria) have jointed  the conference. This scientific forum united the scientists from 50 countries of the World. This year about 2000 scientists from Ukraine and 46 representatives from NIS and other foreign countries including Hungary, Greece, Great Britain, Georgia, and Switzerland participated in the work of MicroCAD conference. Professor Miroslaw Rucki from  Kazimir Pulaski Technology and Humanitarian University said “ I have been  cooperating with the Kharkov Polytech Institute for nearly 20 years. I came to participate in the conference not only to deliver my report but also to meet new prominent scientists, familiarize with their developments and meet my old co-workers. We plan to prepare joint scientific publications in cooperation with the scientists of NTU “KhPI”.

MicroCAD -2017 covers about 30 scientific fields. The Program of this forum includes 1373 reports submitted by 1972 authors from 47 cities of the world. A range of subjects discussed at this scientific forum is rather wide and it covers different fields, ranging from the management of investment and innovation processes of the international engineering education through to the fundamental problems of  transport mechanical engineering and energy saving. Presentations of the reports delivered by the scientists at the plenary session of MicroCAD -2017 are enclosed below.

In particular, the report delivered by Prof. Michail Koniordos from the University of Piraeus (Greece) was devoted to new methods and approaches to the education system of students that are of importance during the contemporary period of globalization and cross-culture communications.

“This conference will demonstrate the latest scientific achievements gained by the scientists of NTU “KhPI” and foreign scientists that participate in it”. These are the MicroCAD‒2017 related expectations of Prof. Yevgen Sokol, rector of NTU “KhPI”. In addition, he stressed that actually all foreign delegations that arrived to NTU “KhPI” discuss specific proposals on joint research projects. Professor Y. Sokol believes that all these projects will be funded in the nearest future. This would enable the joint development of these specific fields of science and education with the participation of our scientists.

We would like to emphasize that the XXV International Theoretical and Practical Conference “Information Technologies: Science, Engineering, Technology, Education and Health” (MicroCAD-2017) was held throughout the period of May 17 to May 19.

More photos can be found in album

Presentation of the reports delivered by Ukrainian and foreign scientists participating in MicroCAD‒2017 plenary session:

The idea to hold the theoretical and practical conference at NTU “KhPI” on information technologies was suggested in 1993 during the scheduled conference MicroCAD organized by the Miskolc University (Hungary). Last year this scientific forum summoned more than 2000 participants.