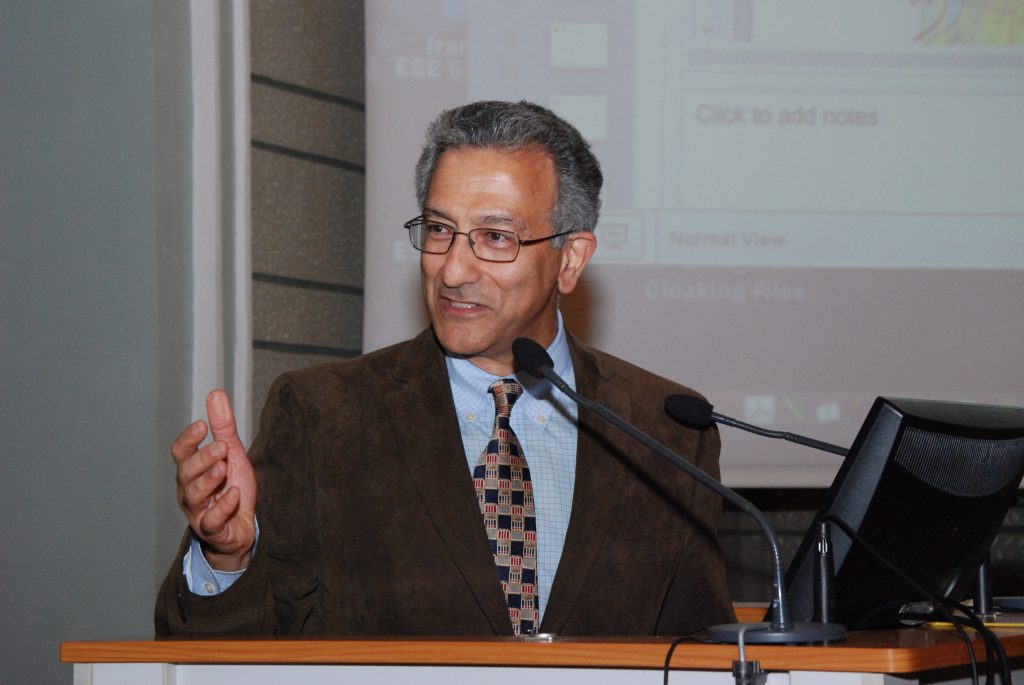 The American Professor Nader Engheta from the University of Pennsylvania visited NTU “KhPI”. His name is on the list of the best top-50 scientists of the world. He gave several lectures to the students and teachers of the University. The lectures were devoted to the metamaterials, nanophotonics, optic visualizations etc. That was the first visit within the framework of KhPI Program “Meeting Successful People”.

Prior to his lectures, Prof. Nader Engheta met the management of NTU “KhPI” to discuss the issues related to the need of execution of such scientific events, in particular giving lectures to the students and teachers of the University and discuss cooperation prospects.

According to Yevgen Sokol, rector of NTU “KhPI” most contracts and agreements that are available today for the University are related to European countries. However, we are also greatly interested in cooperation with the USA universities. We hope that our contacts will continue to develop, because the research areas you are involved in are also topical for NTU “KhPI” – said he. The Rector also added that the University is changing and implements new educational programs, in particular CDIO Conception, STEM-education, etc. “It is very important for us to invite headmost scientists to maintain the development” – emphasized Yevgen Sokol.

In his turn the American professor Nader Engheta thanked for the invitation to visit the University and give lectures.

After the talks with the Rector he gave lectures to the students and teachers of NTU “KhPI”. He delivered lectures in English on such subjects:
• Tailoring Waves at the Extreme with Metamaterials;
• Low-Index Photonics;
• Quantum Optics of Metamaterials;
• Biologically-Inspired Imaging and Sensing.

On November 3, Friday the American Professor Dr. Nader Engheta was presented with the diploma and the gown of the Doctor Honoris Causa of NTU “KhPI” at the extraordinary meeting of the Academic Council of NTU ‘KhPI”. The decision to confer such a rank was taken unanimously (Minutes No7 of 21.09.2017) by the Meeting of Academic Council of NTU “KhPI”) .

Reference:
Dr. Nader Engheta is currently H. Nedwill Ramsey Professor of Electric and Systems Engineering at the University of Pennsylvania (the USA).

Dr. Nader Engheta developed an active research program for different scientific topics in the field of optics and microwaves starting from metamaterials and nanophotonics through the optic visualization of one-atom optic devices and nanometer circuits.

In 2006 Prof. Nader Engheta joined top-50 leaders in the field of science and technology, according to the Scientific American Journal version.

For his contribution to the development of science and technology he was given the following awards:
– William Streifer Scientific Achievement Award of IEEE Photonics Society in 2017
– Beacon of Photonics Industry Award of Photonics Media in 2017
– Golden Medal of SPIE (the International Society for Optics and Electronics) in 2015
– He is a corresponding member of the National Academy of the Inventors of the USA (NAI)
– Dr. Nader Engheta is a bearer of the Baltazar van der Paul golden medal awarded by the International Society of Electrical Engineering (URSI,2014)
– He was granted the Vannevar Bush scholarship of the Ministry of Defense of the USA in 2015 and the Prize for outstanding achievements in the field of broadcasting, IEEE in 2015.
– He was granted the Guggenheim scholarship in the field of natural sciences given to the students in the USA and Canada and other awards.

In 2016 Dr. Nader Engheta was conferred the Degree of Honor (honoris causa) by the University of Aalto (Finland) and Stuttgart University (Germany)