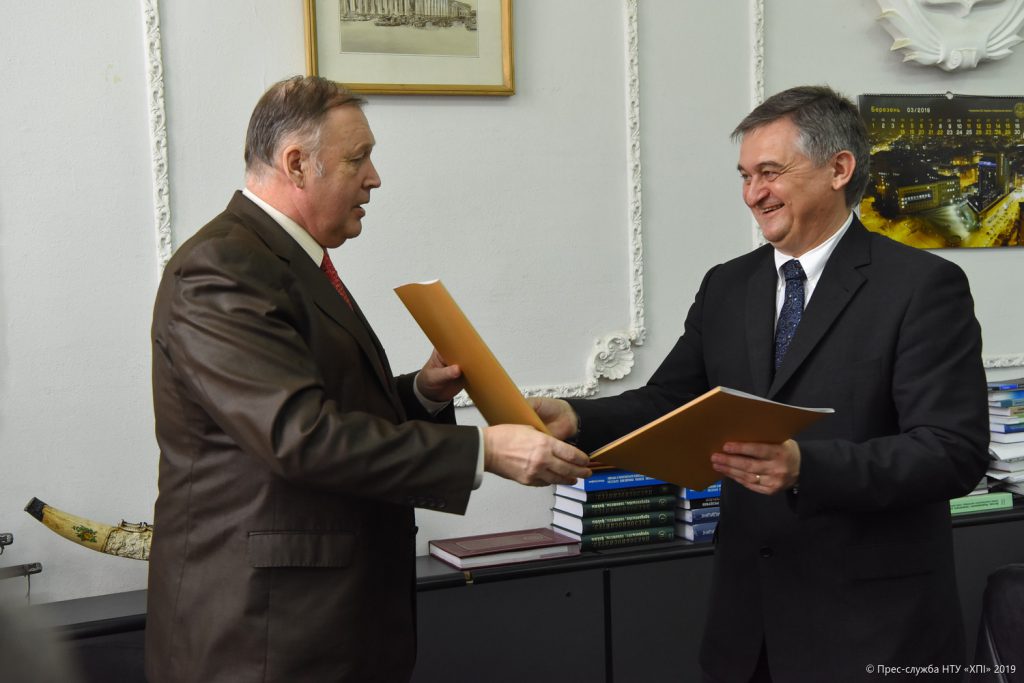 NTU “KPI” has signed a bilateral cooperation agreement with the Slovak Higher School of Economics and Management in Public Administration in Bratislava (VŠEMvs). The purpose of it is to work out the program of dual diplomas for IT and economic areas of focus at KhPI. The agreement was signed within the framework of the visit of the Slovak Republic delegation to NTU “KhPI on March 26, 2019.

The visit of the Slovak delegation to KhPI began with meeting the Rector of the University. The Polytech was represented by Rector Yevgen Sokol, prorector Gennadiy Khrypunov, chief of the Department for International Relations Oleksandr Goncharov, director of educational and scientific Institute for Economics, Management and International Business Oleksandr Manoilenko, and the representatives of the Department for Program Engineering and Information Administration Technologies of KhPI, in particular head of the Department Mykhailo Godlevsky, associate professor Olha Cherednichenko and a post-graduate student Oksana Ivashchenko.

Rector of KhPI Yevgen Sokol spoke about the key areas of the activities carried out by the University and he paid special attention to the introduction of new approaches to the teaching process. “IT is one of the areas that are efficiently developed at Polytech. We make every effort to progress ahead and try to comply with present-day tendencies. For example, we introduce the conceptions of dual education and project-based learning to the educational process of the students. I hope that we have common goals and the cooperation will develop yielding positive results”- said Yevgen Sokol.

Slovak delegation was represented by Mario Lelovsky, vice-president of IT-association of Slovak Republic, Lubos Cibak, the owner of Higher School of Economics and Management in Public Administration in Bratislava (VŠEMvs), Stanislav Filip, pro-rector of VŠEMvs, a representative of the IT–association in Ukraine Galina Lakusta. They spoke about the opportunities for education in Slovakia, new approaches to the education and they stressed their interest in cooperation with Ukraine and with KhPI in particular, because the polytechnics have a very promising potential.

The participants discussed the opportunity for launching the program of dual diplomas that will be realized by NTU “KhPI” and Higher School of Management and Economics in Public Administration in Bratislava (VŠEMvs) in economics and IT areas.

At the end of negotiations, the cooperation agreement was concluded. The basic provisions include doing joint research, holding conferences, seminars, refresher courses, summer schools,  providing access to information resources of both universities; exchange of students, post-graduate students, doctoral students including the exchange of  information, materials and research publications in the areas that are of interest for both parties; realization of joint education programs or other post-graduate events, participation in the programs financed by the European Union and other international projects, etc.

After the meeting with the administration, Mario Lelovsky, the vice-president of IT-Association of Slovak Republic and the representatives of the administration of Higher School of Economics and Management in Public Administration in Bratislava (VŠEMvs) Lubos Cibak and Stanislav Filip presented their activities for the students that study at the Department for Program Engineering and Information Administration Technologies. They narrated in detail about the cooperation of the State with IT-Companies and Universities of Slovak Republic in the field of the development of IT domain, including the advantages of the Contract signed with KhPI and the future program of dual diplomas that will be implemented by two Universities.