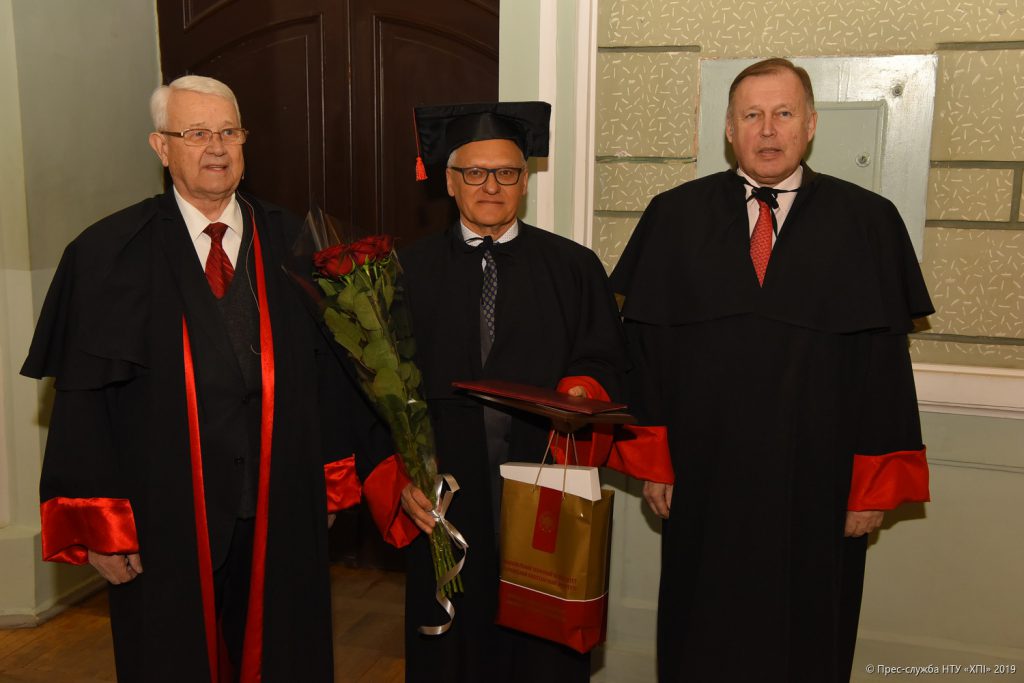 The professor of Polish Technical University in the city of Łódź, who is also a corresponding member of the Polish Academy of Sciences Jan Awrejcewicz became the Doctor Honoris Causa of NTU “KhPI”. The diploma and the gown that confirm this distinguished title were delivered to him by the rector of NTU “KhPI” Yevgen Sokol and the chancellor of the University, professor Leonid Tovazhnianskyy. During the visit of the Polish delegation to KhPI, the negotiations were carried out with the administration of KhPI to discuss a further cooperation between the Universities and Jan Awrejcewicz delivered a lecture to Polytech students.

The ceremony of the delivery of the diploma and gown of Doctor Honoris Causa of NTU “KhPI” was held on March 29 by the Academic Council.  When handing out the award, Prof. Yevgen Sokol, rector of NTU “KhPI” said that this title is the acknowledgement of the merits and efforts made by Prof. Jan Awrejcewicz to develop the cooperation between the universities and his contribution to the development of international research programs.

Professor of the Polish Technical University in the city of  Łódź, Jan Awrejcewicz gave thanks to Yevgen Sokol, rector of KhPI and the attendees  for such a distinguished title  and he emphasized that it was his first foreign title  of Doctor Honoris Causa of the University.

During the visit to NTU “KhPI” the representatives of Polish delegation, in particular the professors of the Technical University in the city of Łódź Jan Awrejcewicz and Lukash Kachmarec held negotiations with the administration of NTU “KhPI”. The participants of the meeting were Yevgen Sokol, the Rector of the University, pro-rector Gennady Khrypunov, director of the Educational and Scientific Institute for Engineering and Physics at KhPI Oleksiy Larin, head of the Department for Applied Mathematics Lidiia Kurpa and head of the Department for International Relations Oleksandr Goncharov.

Rector of NTU “KhPI” introduced the university and directly the Institute for Engineering and Physics and noted that many departments cooperate with foreign partners, in particular with German and Polish Universities. ‘It is an important step for KhPI. We recognize the merits of outstanding scientists that have been cooperating with our University for a long time. It is very pleasant to have a longstanding cooperation with Poland. Our creative ties are strengthened and we have no doubt that these relations will be developed, because we have common interests”- said Prof. Yevgen Sokol.

According to Jan Awrejcewicz, the cooperation will continue and it is of concern to develop such areas as the exchange of students, taking joint efforts for the search of various grants that can be given to postgraduate students and PhD.

Later in the day the distinguished polish scientist Prof. Jan Awrejcewicz delivered the lecture to Polytech students on the subject “Dynamics of the Bifurcation of Coupled/Dual Pendulums in Magnetic and Electric Fields”.

Professor Jan Awrejcewicz heads the Department for Automatics, Biomechanics and Mechanotronics at the Technical University in the city of Łódź. In 2016 he was elected as a corresponding member of the Polish Academy of Sciences. He is one of the distinguished and well-known scientists working in the field of applied mechanics, nonlinear dynamics and biomechanics. He gained worldwide renown thanks to his works related to the development of asymptotic methods, problems of nonlinear dynamics of discrete and continual systems and also biomechanics, robotics technology and mechanotronics. The scientific results obtained by Prof.   Jan Awrejcewicz are of great importance for the solution of practical problems faced by the industry and these are related to the bifurcation and chaos and the development of new methods for the studies of nonlinear effects in the systems that are simulated using differential partial-derivative equations.

Many scientific projects are realized under the supervision of Prof. Jan Awrejcewicz. Throughout the period of at least 13 years the Professor of Polish University has been cooperating with the scientists from NTU “KhPI” and in 2011 the Agreement on cooperation with the Technical University in the city of Łódź was signed.