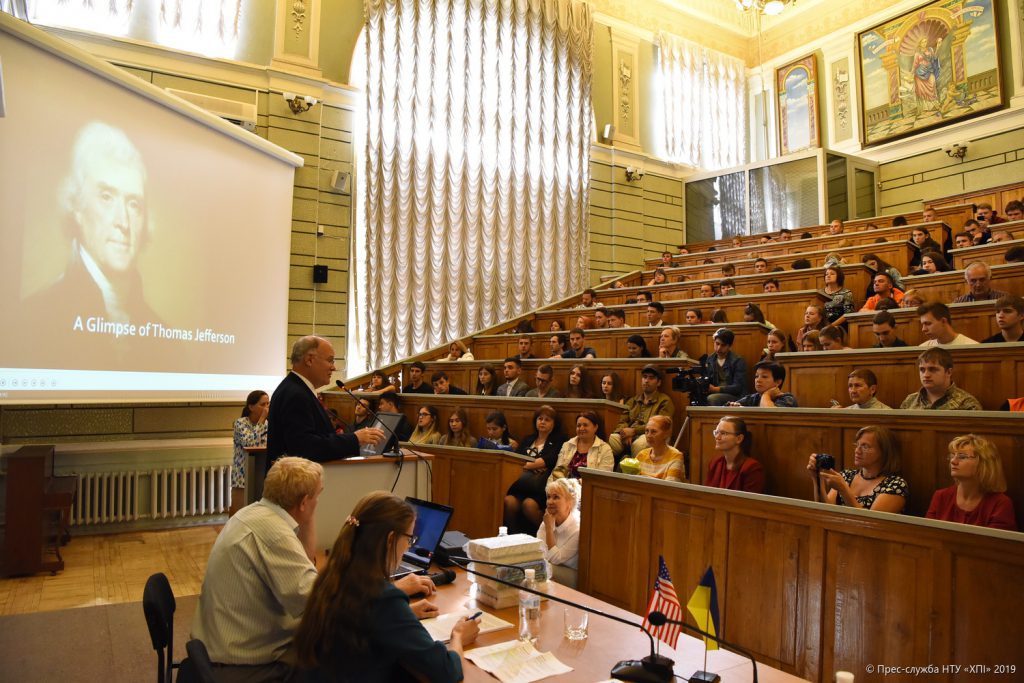 Today a presentation of the book “Light and Liberty. Reflections on the pursuit of happiness” which is based on the work of the third President of America Thomas Jefferson took place at the NTU “KhPI”. Book editor is American lawyer Eric Scott Petersen, who also gave a lecture on the topic “The Historical and Philosophical Legacy of Thomas Jefferson in the Modern World”. The event was attended by students, teachers of the Polytechnic, and other guests. In addition, E. Peterson visited the KhPI Scientific and Technical Library, and met with the administration of the university.

“I am very glad to be invited to this beautiful university. I am happy that you see universal wisdom in the words of Thomas Jefferson, who was a man of the world. He wrote not only about America, but thought about people all over the world. T. Jefferson felt that education is the key to the progress of civilization. In his opinion, ordinary residents themselves are the guarantor of their freedoms, and they should be educated. He felt that progress should go hand in hand with the education of the country’s inhabitants. During his life, Thomas Jefferson worked in many public positions; he was a man of action, a man of ministry, just like a thinker, an inspirer of ideas” said Eric Scott Petersen.

During the lecture, “The Historical and Philosophical Legacy of Thomas Jefferson in the Modern World,” Eric Peterson spoke about the wisdom and ideals of the third President of America, Thomas Jefferson, and his ideas about the best possible society. The lecturer focused on the fact that Jefferson lived at the time when the new nation was founded, and was one of those leaders who brought ideas to life. He defended national ideals, and writing was an effective weapon in his public debate. The main message of the meeting is about the equal rights of people, the importance of education, freedom, which will lead to happiness.

Eric Petersen also presented the book “Light and Liberty. Reflections on the pursuit of happiness”, which was edited by him in 2004 in the USA, and was translated into Ukrainian in 2019 and is a collection of published works by T. Jefferson. Its goal is to convey to youth the historical values ​​that an outstanding American politician has left in his writings, to return Jefferson’s “light” to his contemporaries. All interested participants in the meeting received a book as a gift (170 copies were handed over), as well as certificates. In addition, Eric Petersen presented the NTU “KhPI” library with a complete works – a 6-volume edition of the works of T. Jefferson. For its part, KhPI awarded Eric Peterson the Honorary Polytechnic Award; he was also presented with NTU KhPI souvenir products: a cap, booklets, a book published for the 130th anniversary of the university. In addition, during the visit to KhPI, an American lawyer and biographer Jefferson met with the administration of the Kharkiv Polytechnic University: vice-rector for research Andriy Marchenko, Honorary Rector of KhPI Leonid Tovazhnyanskyy, and also visited the Polytechnic Scientific and Technical Library, where he had a tour.

Thomas Jefferson (April 13, 1743 — July 4, 1826) – a prominent figure in the US War of Independence, one of the authors of the Declaration of Independence (1776), the third president of the United States in 1801-1809, one of the founding fathers of the American state , an outstanding politician, diplomat and philosopher of the Enlightenment. During his lifetime, he was a delegate to the Continental Congress, a member of the Virginia State Legislature, a Governor of Virginia, a member of the U.S. House of Representatives, the U.S. Ambassador to France, the Secretary of State, the Vice President and President of the United States, and the founder of the University of Virginia. After the death of Jefferson, his political legacy totaled a large number of official documents. Among them are public appeals, official speeches, reports, charters, pamphlets, observations, letters, notes about travel impressions, biographical messages and more. He was also a book collector.

Eric Scott Petersen is one of the leaders of a major US law firm and legal expert in public finance and environmental protection. He is one of the founders of the National Council for Public Partnerships of the United States, is a leading expert in the United States who has been researching the work of the prominent politician, third President of America Thomas Jefferson, for more than 20 years. E. Petersen – editor-compiler of the book “Light and Liberty. Reflections on the pursuit of happiness – a collection of published works by Thomas Jefferson. The book was published in the United States in 2004 by ModernLibrary, a subsidiary of The Random House Publishing Group (www.modernlibrary.com), and has been reprinted many times in subsequent years.

According to the results of his research, Eric Petersen gave lectures on Thomas Jefferson at many universities and other institutions in the world, including Harvard University, the University of Iceland, the University of Washington, the International University of Florida, the Senate of the Parliament of the Czech Republic, the UN headquarters and many others.