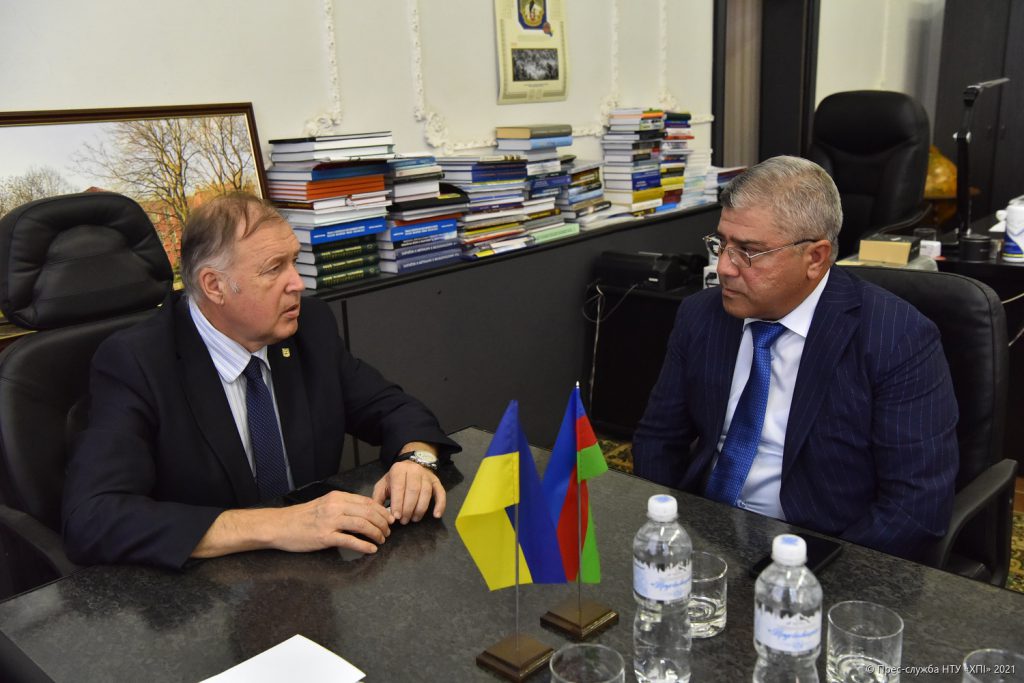 The delegation from the Academy under the Ministry for Emergency Situations of the Azerbaijan Republic headed by its Rector Baba Naji-Baba oglu Salayev paid a visit to NTU “KhPI”. During the meeting the guests got acquainted with the activities of the Kharkiv Polytech and discussed the prospects for mutually beneficial cooperation. In particular, the speech was about the extreme and crisis psychology. The Parties agreed on the arrangement of the joint work relating to the issues of the development of the individual and organizational leadership capacity.

During the talks with the members of the delegation from the Academy under the Ministry for Emergency Situations the participants discussed the avenues for the promising cooperation of the institutions of higher education in educational, scientific and cultural areas. The top-priority interests for the representatives of the Azerbaijan delegation were the development of the individual and organizational leadership capacity and also the issues of extreme and crisis psychology. The KhPI entrusted this scope of research to the Department of Social System Control Pedagogy and Psychology named after I. A. Ziaziun (the Department is headed by Oleksandr Georgiyevich Romanovskyi).

When discussing the prospects for scientific cooperation, the attention was paid to the best practices of the scientists working for the Research and Design Institute “Molniya” of NTU “KhPI” in the field of the protection of important national facilities exposed to the action of electromagnetic radiation of natural and scientific origins.

As a result of this meeting, the decision was taken to sign the international contract on scientific, engineering and educational cooperation between the Universities. This event is planned for October 2021 in the city of Baku (Azerbaijan Republic).

NTU “KhPI” was represented by Rector Yevgen Sokol, vice–rector in charge of scientific and pedagogical work Gennadiy Khrypunov and the deputy chief of the Department for International Relations Oleksandr Vasyliuk. On the part of the Academy under the Ministry for Emergency Situations of Azerbaijan Republic the participants of the talks were Baba Naji-Baba oglu Salayev and the chief of the Department for Correspondent Education Ilgar Firdovsi oglu Dadashov.

The meeting was initiated by the Department of Social System Control Pedagogy and Psychology named after I. A. Ziaziun of the Kharkiv Polytech.